The water authority of North-Holland (HHNK) has the ambition to obtain a 24/7 water flooding picture of their service area. To be able to do so it is necessary to have models with a fast run-time but with enough accuracy and detail. The area of HHNK consists of many polders where the flow in the unsaturated zone is an important part of the hydrological cycle.

Commissioned by HHNK, it was investigated whether the unsaturated zone of the soil can be better modeled using the ‘interflow’ functionality in 3Di. This distributed interflow layer in the model can absorb water slowly and gradually let it flow out again. Nelen & Schuurmans have used the model of the Schermerpolder to investigate which schematizations configurations are possible to simulate this process

Developing an accurate flooding picture under increasing precipitation extremes requires accurate model components. It is crucial to properly simulate both the fast discharge and the slow discharge. However, the current BWN models of HHNK are not sufficient in calculating slow discharge in long-term precipitation series. The limiting factor is the lack of a retarding ‘sponge layer’, which fills slowly during precipitation and gradually deflates afterwards. The new interflow functionality has been developed with the aim of modeling this process more accurately. The conducted research focuses on refining and optimizing this extra interflow layer for the Schermerpolder. 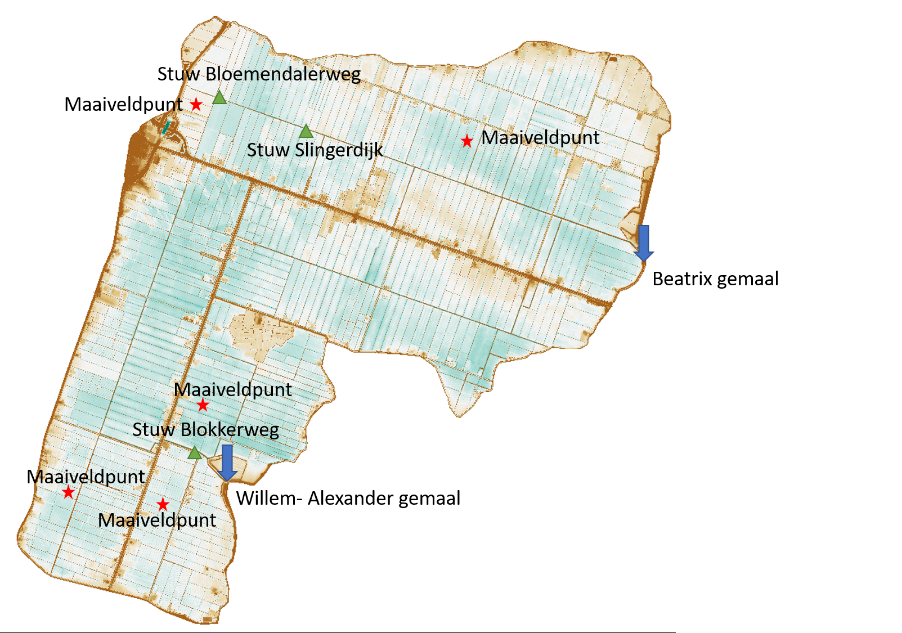 The research was conducted in four phases:

The basic flooding model has been developed within the BWN2 project with 3Di. For the current case, updates have been made for weir control and the simulation period has been extended. This simplifies the implementation of the interflow layer and increases the accuracy of the reference scenario.

The interflow layer covers the slow discharge component by calculating both soil filling and emptying. The physical basis is hereby described by Darcy’s equation for 2D groundwater flow. Water is stored internally, after which free flow towards waterways takes place. The layer is located directly below ground level and is spatially parameterized by the variables: thickness, effective porosity, and permeability. However, the interflow layer does not operate as a separate layer, but as an additional flowline between existing cells. This limits the simulation time. By conceptualizing multiple interflow types, varying in configuration, the area-specific applicability has been made clear and optimized.

A good description of the relationship between volume and water level is essential for a correct flow calculation with interflow. By applying the subgrid technique, 3Di describes this non-linear relationship for each calculation cell at a high level of detail. This makes it possible to accurately calculate in which places within a calculation cell the soil is saturated and where water remains at ground level.

The research has shown that the interflow layer in 3Di accurately models the behavior of the unsaturated zone in precipitation-runoff processes. By using this layer it is possible to operationally deploy the integral 1D/2D models for an up-to-date flooding picture. With this, HHNK has taken the first steps towards such a ’24/7 flooding picture’.