When you think of coastal protection, you quickly think of ‘hard’ technical solutions, such as quays and dikes. However, mangrove ecosystems have proven to be a cost-effective and sustainable alternative. At the same time, mangroves are fragile ecosystems, and their functionality as coastal defenses can be lost if certain hydrodynamic tipping points are reached. To understand better the functioning and resilience of mangroves, hydrodynamic models are often used to investigate the sensitivities of these systems. A well-known practical problem of hydrodynamic simulations is that a trade-off must be made between spatial resolution and computational times. Fortunately, the relatively new numerical method of subgrid-based hydrodynamic modelling has shown, that it can accurately handle high resolution spatial data, without greatly affecting the model computational times.

This research focuses on how the effect of vegetation can be accurately included in a subgrid-based hydrodynamic model. We apply this in the mangrove forest of the Whitianga estuary in New Zealand. Here, an extensive measurement campaign has taken place. This showed that the drag, due to the presence of vegetation, affects the flow pattern. For this model study, the effect of the subgrid method is first tested. This to determine the potential of it in intertidal areas. Subsequently, two vegetation representations were tested. 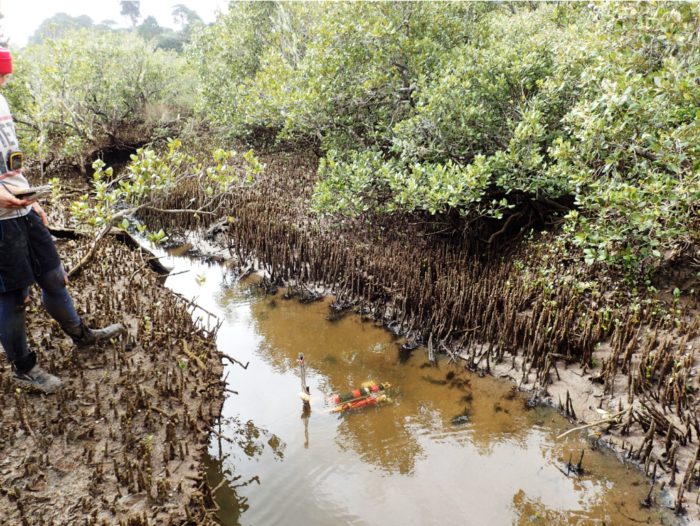 The first representation by adding a spatially varying bottom roughness, as is often done. The other representation is to calculate the flow through the dense forest as through a porous medium, which has never been done before. Based on this research, three important conclusions can be drawn.

Firstly, the results of the different representations show that the use of subgrid has considerable potential in modelling the dynamics of intertidal areas. It has clearly been demonstrated that accounting for the high-resolution spatial data, is important for the predominantly bathymetry-driven flow in intertidal areas. With the subgrid modelling method, the model is approximately 100 times faster than for a traditional modelling approach with the same spatial resolution, thanks to the use of larger computational cells.

Based on the results of the simulations with a spatially varying bottom roughness, can be concluded that the ability of the model to reproduce the observed tidal dynamics improved. This is especially true during low tide. The fact that this effect is small during the highest water levels in the study area is due to the reduced influence of the bottom roughness at greater water depths. This is in line with the hypothesis.

The third conclusion is based on the results of the model, where the flow through the vegetation layer was represented with a porous medium using 3Di’s interflow option. This approach showed improvements of the modelled flow rates on the forest platform. However, it did not appear to significantly improve the simulated highest water levels in the area. In addition, the modelled low water levels in the creek, where less accurately computed. In short, intertidal areas with and without mangroves can be modelled well with the subgrid modelling technique. This study showed that it reduces the computational time without affecting the modelled hydrodynamics. Including the effect of vegetation, through the interflow option, showed potential, but would need to be expanded to better implement it. Finally, it is important to investigate other vegetation representations, that scale with water depth and be used in combination with subgrid.

More information and references can be found at: https://essay.utwente.nl/92211/