In a previous study a detailed rainfall-runoff model was created in order to simulate inundation in extreme weather
conditions. The customer was interested to what extend the model was also useful for common rainfall events and
simulating longer periods of time, and what the influence of the sub-soil was on the runoff processes.
During this study a month of rainfall and pumping station data was used to construct a water balance of the polder,
and compare it the model results (Figure 5). It was found that the model was performing extremely well during wet
periods. During dry periods a difference between model and measurements develops over time, as the model was
initially designed for extreme rainfall-runoff scenarios and does not include the long-term sub-soil processes.
Currently, a new study is performed on how to change the schematization choices in order to better reflect the soilprocesses occurring in the polder system without compromising on the detail and the speed of the model. The
interflow layer in 3Di adds sub-soil processes without increasing the amount of calculation cells, keeping the
calculation time to a minimum. 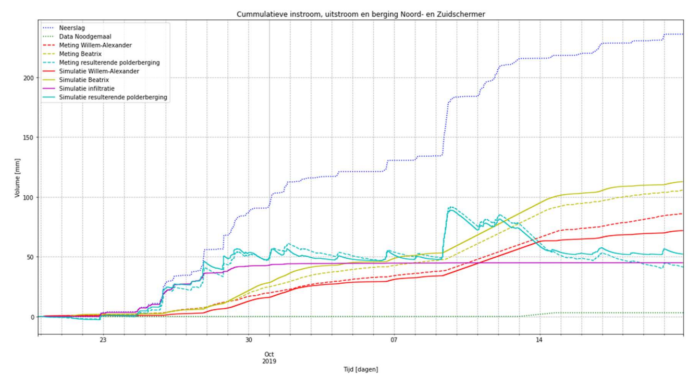 Water balance based on measurements (dashed lines) and simulation results (continuous lines). The forcing is the rainfall (blue). The outflows of the polder are the pumping stations Willem-Alexander (red), Beatrix (yellow) and an emergency pumping station (green). The resulting water balance is
the increased storage in the polder (turquoise). In purple the simulated infiltration is shown. Because the current model schematization does not include
the restoring capacity of the soil, the soil becomes saturated.